Are you here to learn how to tame a fox in Minecraft? Determined effort and thoughtful preparation are all that are required. Like most other creatures, you can find the Minecraft foxes wandering the different biomes. Foxes are one of the game’s sweetest creatures. Like in real life, considering the whimsical appearance, you must handle a Minecraft fox carefully.

After learning how to tame foxes in Minecraft, you can keep them as a pet and have a close partnership with them. You will be able to make a big fox squad by doing this. That looks awesome, but taming a Minecraft fox means you have to breed them, giving you tamed offspring to connect to your herd in Minecraft. It depends on you how you can take benefit from this force. But if you’re into this one, you might keep things rolling and create an enormous fox squad.

Remember, foxes are naturally shy creatures who will flee if you approach them. If you know what you’re doing, it is possible to tame one and turn it into an alliance. Other than chasing and hunting small animals, this furry companion will assist you in fending off attacks from mobs. Their jumping ability makes it possible for them to climb fences and many other smaller items.

Do you want to know can you tame a fox in Minecraft or not? The simple answer is yes, you can, and we will tell you how to tame this fantastic creature in Minecraft. It only takes a few minutes to make your personal Minecraft fox companion by following the simple instructions below!

What are Foxes in Minecraft?

Before we dive into how to tame foxes in Minecraft, let’s talk about the foxes. Minecraft fox is vying for the title of most charming Minecraft animal, joining wolves, cats, and ocelots in the exclusive lists of tamable creatures. They have a good chance of succeeding. Foxes are docile mobs featuring various interesting characteristics which allow them to be considered a fascinating inclusion to the game’s large wildlife collection.

Foxes can be difficult to hunt down based on your fortune. You can see them in taiga biomes, and they are not as abundant as some other common mobs. Foxes, on the other hand, usually appear in clusters of three to four, which helps to compensate for their scarcity.

In Minecraft, there exist two distinct types of foxes to encounter. You will see the red or white Minecraft fox in the taiga biome area. Similar to Arctic Fox, the foxes that appear in taiga biomes contain grey and white fur. As a result, they are the greatest part of Minecraft.

Where Will You Find a Fox in Minecraft?

Minecraft fox taming is one of the most interesting and best things in the game. But the fox is a bit more difficult to come by than any of the other Minecraft animals. One thing to keep in mind about Minecraft foxes is that they’re wild animals, so anyone willing to advance their hunt may have to do it at night. For sure, things become even riskier when you’re about, so beginners should ensure they can defend themselves against anything that could wish to turn your new pet into food before proceeding to fox-hunting. 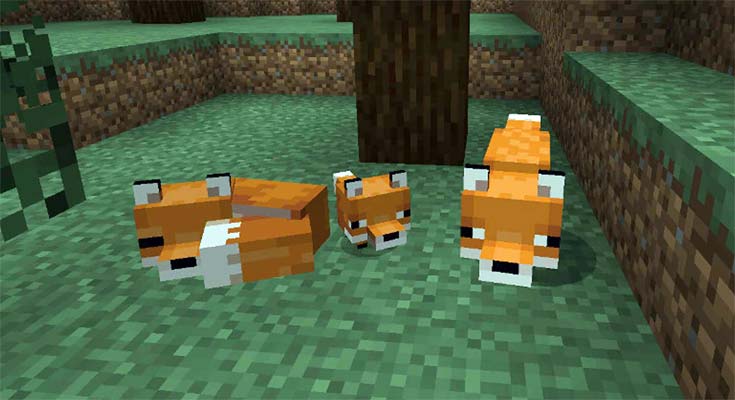 Minecraft foxes are nighttime gangs that spawn in the dark, particularly in forests, and can be found in the taiga, giant taiga, and snowy biomes. Snowy foxes in Minecraft have white fur, but their behavior is just like foxes in other biomes. They typically breed in pairs of 2-4 foxes in each group and have a 5% possibility of spawning as baby foxes.

In Minecraft, foxes have a 20% chance of spawning with things such as an emerald, rabbit foot, rabbit hide, egg, wheat, leather, or a feather, which are probably from their meat. It may be enticing to pounce on a fox sleeping with any of these items in its mouth. But if you move onto an adjacent block, the fox will wake up. A fox can lose one or two experience orbs if a wolf or a player kills it. Anything you require to learn about Minecraft fox tame is right here, including how to tame fox Minecraft and where they spawn.

How to Tame a Fox in Minecraft?

So, it’s nighttime, and you’ve discovered a fox, but it continues scurrying away from you. Foxes, such as other nervous species in Minecraft, are somewhat shy, so you’ll have to tackle them quietly. Having some Sweet Berries on hand is a convenient way to break down barriers between humankind and fox. Foxes love berries, so until creeping up to them and engaging with the fox, ensure that you have a bunch of this food. Tiny hearts blooming in the sky will mean that your gift has been accepted. 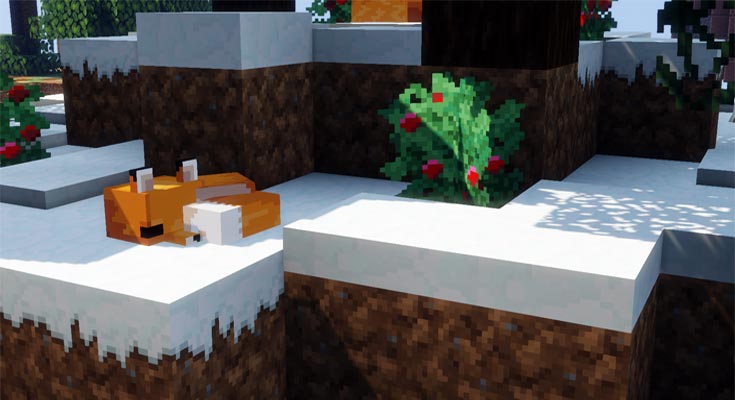 In order to tame a fox in Minecraft, you must first create a new fox; actually, you must persuade foxes to breed. Giving one sweet berry to one fox and another sweet berry to the other one you want it to mate with is all it takes. And after that, wait for them to mate since the newly hatched fox would be devoted to you.

The issue is that it may want to imitate the other foxes as well. Get it separate from all the other foxes if you would like it to pursue you. Attaching a lead to it and walking away from different groups of furry fauna is the simplest option to do this; it will then have only eyes for you. Now that you’ve got it under your control needed to look after it.

Although you may be able to find leads in the forest, you’ll most likely have to make one with four-string and one slimeball. Furthermore, if you want to cross a white and a red fox, your child would have a 50% probability of either being white or red.

You’d imagine that Minecraft’s foxes are used to humans pursuing them by now. But if you pursue them without a sneak, they will escape. The same is true for Minecraft foxes when wolves attack them; they fear these crowds and flee. If you would like your fox to stand on, you can trust them, and they will battle any gang that threatens your player once they have gained your faith.

Untamed foxes, on the other hand, aren’t afraid of anything and will harass fish, chickens, rabbits, and baby turtles. They will cause chaos in a Minecraft village because of their ability to jump walls and fences. They like to come when dark.

What Do Foxes Eat in Minecraft?

Foxes love the delicious berries that grow on the bushes. They even not left any food that falls to the ground, with the exception of cake. They enjoy sweet berries, and when a player gives berries to a fox, it falls in love with that person. Now is the perfect time to Minecraft tame fox, and the fox is able to breed.

Sad to say, unlike tame wolves, foxes will not be your loyal friend on an excursion. You should have to lead if you want to take foxes anyplace. As their best time for sleeping is during the day so it’s better to leave them at the house.

How Do You Befriend a Fox?

If you drop things outside for a fox to eat on your land, it can’t be too difficult to become friends with it. This thing will pull the attention of the foxes in Minecraft towards your property and encourage them to return. Vegetables and fruits are favorites of foxes (especially sweet barries).