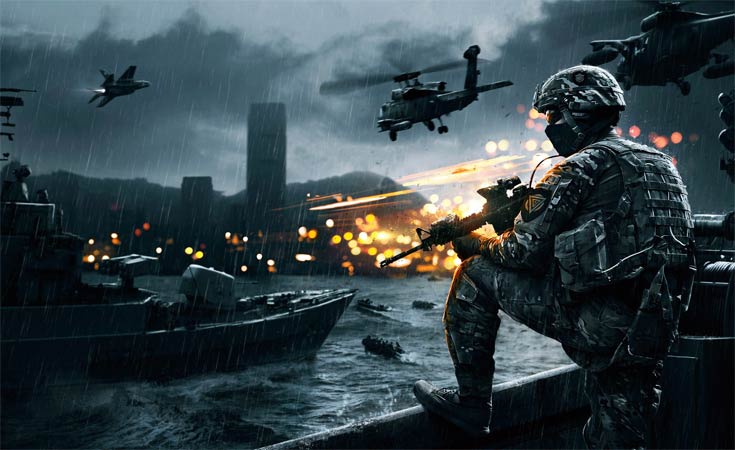 The best Military games come with interesting mechanics. You have to create a strong strategy to win battles and proceed to new missions. Such games are also full of intense action and gameplay. Explosions, gunshots, and battles make them quite awesome. You may end up getting attached to your side. Losing soldiers will become a source of pain and grief as the game progresses. Not only that, you may feel a personal responsibility to restore peace and order in the world.

If you’re an enthusiast of games that are based on military missions, you may have seen scores of war-related documentaries on Charter Spectrum cable. Chances are that this knowledge will help you play effectively. Well, here are five of the best military games for you.

The Medal of Honor series is quite popular among fans of war simulation games. The 2010 release of the game is based on the invasion of Afghanistan. The game kicks off from the Bagram Airfield. You have to clear it and then conduct special operations in Shahikot Valley.

All of this is a depiction of the real Operation Anaconda to quite an extent. The operation involves many special operators, thousands of soldiers, and many guerilla warriors. However, the names of key characters, such as important soldiers and units, are different. Regardless, many of the important events are strikingly similar to real ones. The Delta Force calling in airstrikes is an example.

The 2002 Medal of Honor: Frontline had some of the events from this release. It also includes battles such as the D-Day landings and Operation Market Garden.

Read also:- Best RTS Games Like StarCraft You Should

Many games are set around the World Wars. Call of Duty 2 includes war situations that resemble real ones. It mainly focuses on the fighting in North Africa. For example, you can play with the Rangers on D-Day on Ponte du Hoc.

Other versions of the same game have missions that require you to defend Pavlov’s House. They also include the decisive attack on Berlin. However, many of these events aren’t exactly like they happened in the real world. The “Operation Pegasus” is a far cry from the actual event of the same name. Similarly, the attack on Eder Dam has nothing to do with the actual Dambusters.

Battlefield Vietnam, as the name implies, is a game that is about the Vietnam War. The game was originally released n 2004 and comes with a lot of gun action. The game adopts an arcade approach at times. You will notice this in events such as the Ho Chi Ming Trail and the Siege of Hue. However, you will enjoy these settings and the action involved. You can also use vehicles such as the Patrol Boat-Riverine.

Company of Heroes is another game that comes with military missions. You will need to create a thoughtful strategy to win battles. It all begins from landing at Normandy and then driving to Berlin. From here on, you have to command the companies of the 1st Infantry Division. You will also control the 101st Airborne Division.

The game adopts a modern approach and allows players to do anything during the war. You will have the liberty of upgrading your units or improving their engineering capabilities. However, the map changes with every battle and you’ll need to devise a good strategy for every battle.

Ultimate General: Civil War is another one of the best strategy and military games. The game is about the Civil War battles in the USA. There are two campaigns in the game namely Union and Confederate. Popular Battles include Bull Run, Gettysburg, Chickamauga Creek, Chancellorsville, and Cold Harbor, etc.

The game’s mechanics are quite interesting. The size of your force depends on how you play in each battle. If you’re underperforming, you may have a smaller army even in battles in which your side had larger troops historically. Therefore, take every battle seriously. You may end up losing battles your side actually won!

These are some of the best strategy and military games. Plan your battles while focusing on improving the attributes of your soldiers. Guide them to victory!