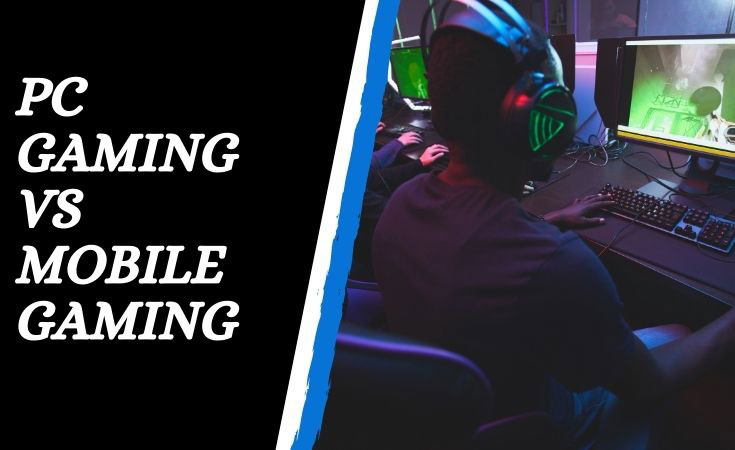 A detailed guide about the difference between PC gaming vs Mobile gaming. Which platform is better and how they are successful in their own manner.

This generation of gamers is fortunate in terms of having the availability of different platforms to play games. On the top of the stack, two platforms appear vividly for gaming; PC and smartphones.

Immense game options are available on both platforms. You can find games famous nowadays to games that are not in trend or old. Besides, every major mobile app development company target both platforms now to cater both platform’s audience.

Both of these platforms have some supremacy over each other in multiple factors. Do you think it is possible to find the best gaming platform between these two? Let’s find out the answer in this article. We will look on both sides of the walls so that the story will be apparent to us. Nonetheless, both are best and entertaining their audience beyond expectations, but the comparison is the human psyche, so we are helpless! 😉

For most gamers, gaming can only happen on personal computers. To some extent, it is believable as desktop systems have robust hardware to handle graphics. But it’s not true entirely.

PCs have covered a long journey from casual card games to survival and war games. In visual, graphics, and processing capacity, PCs are unrivaled—games on PC support customization on a high level, which is the primary source of popularity. In a budget, one can build a system, fulfilling various needs. Additionally, desktop systems are upgradable, so one always has an option to add or replace components with the latest and powerful ones. Check Out: best mid-tower case

Also read:- How to build a gaming PC?

As per their wish, gamer can update their experience to any level. The process called overclocking gamers often uses to unlock the processor’s hidden power and go beyond limitations. However, it’s a critical process and can damage your hardware permanently.

Apart from gaming, we cannot forget that we use desktop computers for several activities, and it is not dedicated to games only. It has usefulness in various aspects.

Besides, if we create a comparison between PC and console gaming, the console outperforms pc without extra effort. However, for achieving performance from PC parallel to console, one requires rich technical expertise to gain it on a budget.

In the gaming arena, mobile phones are the new and favorite devices of gamers. Also, compared to other gaming platforms, the entry barrier is lower for any custom mobile game development company. The prime reason behind this is the cost factor that is comparatively much low than the pc or console games. Even without spending a penny, one can develop a basic-level game by utilizing free tools and game assets.

Besides, mobile phones are light in weight and can be carried anywhere because of their portable size. Their battery also does not require to be plugged in every time and gives the user a long-lasting backup even for days. Also, mobile devices face fewer technical and software-related issues, whereas pc games need drivers specific to the model and other software to power up the game.

Moreover, mobile games are also entering into Esports. So, if you are a smartphone gamer, you must participate in mobile gaming tournaments that happen on a global level where winners receive prizes and worldwide recognition.

Furthermore, gaining some points or advantages in a game requires watching ads via which developers generate some revenue on their game. In many scenarios, children spend too much on micro-transactions in games to be ahead of their friends.

As we discuss mobile games, AAA games are less likely to be present on mobile platforms as they are more focused on graphics quality, requiring immense processing power. One more thing to notice here is that mobile controls are tricky and might need some time to get familiar with. It is especially true for baby boomers who have a habit of seeing things on the big screen and struggle to interact with devices with touches and gestures.

Which Platform is Better for Gamers?

Mobile phones are the most evolved species in the gadgets’ world; powerful, innovative, and beneficial. In the gaming section, they are not the same used to be years ago. Today’s games on smartphones are speaking innovation.

Some flagship smartphones have started using DDR4 RAM technology which we typically see in desktop computers. Bigger and bigger screen sizes are coming along with the high resolution and realistic graphics. New optimized game engines and frameworks developers are utilizing to develop desktop games and another version for smartphones.

Due to the immense mobile gaming growth, more game development companies are following the same footstep. Even mobile manufacturers are launching their smartphones in collaboration with games like PUBG Mobile and Fortnite and promise the best gaming experience.

In some Asian countries, such strategies are so successful as gaming is a full-time profession for many individuals. They earn their livelihood by doing live streams and entertain internet users. Their entire career depends on gaming. They try every new and trending game according to audience demand and collab with other gamers for friendly matches.

Games on PC are Less Casual

There are many competitive and AAA games on pc which gamers enjoy playing, in contrast to games on mobile that happen to be primarily casual. PC games like Grand Theft Auto V, Counter-Strike, Dota, and League of Legends dominate Esports competition, and they don’t have their mobile versions.

However, the trend is gradually shifting, and game companies are also introducing AAA titles for mobile devices. The best example of this trend is COD (Call of Duty) and PUBG, although the graphics quality is downgraded due to power limitations.

When it comes to game experience and peripherals, mobile and pc compete parallel with each other. There are also controllers available for tablets and smartphones that enhance the experience and give gamers more control over their gameplay. The story is the same for PC games – Gain control with advanced controllers.

Apart from that, today’s smartphones also support keyboard and mouse attachments. Thus, gaming peripherals tend to give an enhanced experience regardless of the platform.

There is no debate in PC and mobile games. Games on PC offer superior graphics to engage gamers in the gaming world, while smartphone games are a little casual. But that is not a topic to debate because it depends on an individual’s preference and lifestyle.

For many developers, mobile game development is an area promising for success in the market. Also, the resource requirement to develop a mobile game is less in comparison with PC games development.

PC games require advanced tools and approaches and are not a task one person can do alone. For achieving the best results, a team put collective efforts and strategize all the development phases.

Hopefully, you have gained an understanding of mobile and PC games in this article. Both platforms have their significance and comparing them to choose one is a fallacy. So, enjoy both worlds!