The Elder Scrolls is one of the biggest fantasy universes out there and it can boast a wide selection of video games, big and small. Skyrim just celebrated its 10th anniversary with a new update, while Elder Scrolls Online is nearing its new expansion. But there is so much more to this franchise than its latest titles.

Tamriel Rebuilt is a fan-made project for TES 3: Morrowind that attempts to recreate the continent of Tamriel. Wait, Morrowind? – you may ask. Yes, the very game that precipitated the ultimate success of the franchise almost 20 years ago. Since that moment fans have been anticipating to see Tamriel’s nine intricately woven provinces in the confines of one game. But doesn’t Elder Scrolls Online offer just that? – you may ask again. Let’s take a closer look and find out.

The Beauty of the Dawn

When Morrowind was announced at the beginning of this millennium, the developers promised that we would get an entire long-awaited province of the same name. But the transition from the procedurally generated world in the previous game to a system of manually crafted locations showed Bethesda that they couldn’t pull it off. This led to a decision to confine the game world of TES 3 to the island of Vvardenfell alone, which when released was approximately one-sixth of the promised land size.

This led to a major disappointment among the players. And a timely announcement of the development tools that would come with the game gave fans the idea to create the rest of the game world on their own. This initiative started the Tamriel Rebuilt project, which thrives to this day and even competes with the latest Bethesda titles in quality.

Since the Elder Scrolls Online represents Tamriel only in patchwork, showing less than half of each province, the dream of a united Tamriel persists. It seems like fans should provide dissertation help to the developers of their game.

But what’s the point of a fan-made project when an AAA title is doing it already? And therein lies the catch. Every major Elder Scrolls game is known for retconning parts of the previous titles’ lore. That makes every TES game so different from the others that they’re almost like separate franchises. And the advent of retrogaming shows that there is a considerable number of people who lean for older titles in search of classic traits, lost in modern gaming.

An Expansive World for the Smaller Game

Tamriel Rebuilt started as a loosely organized group of enthusiasts that grew into a fully professional project with decades of experience in modding. In a series of five big releases and several smaller updates, the team has managed to recreate a landmass filled with quests to the east of Vvardenfell; the base game’s island. And it rivals it in size and playable content. Essentially it’s like an expansion that doubles the game world of Morrowind, full of new interesting locations, lore, adventures to do, and items to collect. 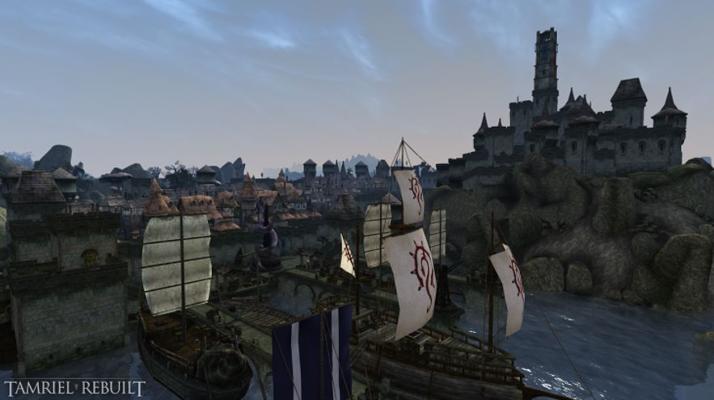 Due to the age of the project, there is variation in quality. The old locations may seem simple, while the cities of Old Ebonheart and Almas Thirr have jaw-dropping level design and writing. The former settlement can also be praised as one of the biggest open-world RPG cities of all time. And this leads us to another interesting fact: the scale of the world in Morrowind is bigger than in later Elder Scrolls titles. This is easy to overlook, but Tamriel set in TES 3 would have been at least twice as big as shown in TES 4, TES 5, or ESO. And this alone makes recreating this version of the famed continent in Morrowind an intriguing endeavor.

What makes the old Morrowind so dear to its fans is the lore written by the eccentric game designer Michael Kirkbride and his fellow Ted Peterson. To this day their bizarre and alien fantasy mesmerizes TES fans across the globe. But newer games developed their own lore that partly replaced Kirbride’s ideas in order to make this universe more accessible. Not a bad thing in general, but it creates a longing in players to see that very inspired Tamriel that was shown to them in the game manual called Pocket Guide to the Empire.

Every province of Tamriel described in that game manual is so vivid, that it pushes the normal conventions of fantasy tropes to the extreme. Tamriel Rebuilt developers have grasped the concepts of that book in a list of principles. And one of them is the Principle of Alienity – What is boring and mundane is wrong; what is interesting and alien is right. Alien in excess is mundane. This defines the charm of TES 3: Morrowind pretty well, and the project aims to represent it on every level of their worldbuilding. What they Achieved So Far Overall, the project has managed to create roughly half of the Morrowind mainland. It may sound small, but remember the world-scale difference with other titles. Also, there’s a sister project that aims to make other countries of Tamriel and already can impress you with a big chunk of land in a mod Skyrim: Home of the Nords. This project recently made quite a big hit on YouTube with its Dragonstar release trailer.

While the world waits for The Elder Scrolls 6, the fans have grown to create their own Elder Scrolls content that offers dozens of hours of quality gameplay. Tamriel Rebuilt is available on the Nexus Mods website. It is completely free and only requires a copy of Morrowind. And if you want to help, consider joining this massive project at their website. It offers plenty of creative opportunities for level designers, 2D artists, asset creators, and writers of any level of experience.

Tablet vs Laptop: Which One Should You Buy?

In the recent few years, both laptops and tablets have ...

Posted by by TM Admin 23 hours ago

Increasing Your Online Bingo Winnings in 2022

The evergreen games are always the ones that do the ...

Posted by by TM Admin 3 days ago
Load More