The developers have released frequent updates, which have boosted PUBG Mobile’s popularity since its release. Every new update of the game provides many new additional features, improves the user experience and graphics. The only purpose of the creators is to make the PUBG Mobile more appealing to its fans. It’s been more than a month since we had received the PUBG Mobile 1.8 update with M7 and M8 Royal Pass. Only a few weeks left for the end of the 1.8 update and after that, we will see the new things in the game. So, we are here with the PUBG Mobile 1.9 update release date, leaks, and how to download this update.

The beta for the upcoming PUBG Mobile 1.9 update has been released, so expect it in the near future. A frequent update plan for PUBG Mobile has allowed the game to grow exponentially since its beginning in 2018. Same as previously, the PUBG lovers are very keen to know about the new upcoming update leaks, release date, and features. The Beta version is already available and many users have installed it on their devices to try the new features. But remember the Beta version is always released only for testing purposes containing a lot of bugs. But, it’s good enough to get to know about the PUBG Mobile 1.9 update leaks.

We had got the PUBG 1.8 update at the start of 2022, this update was one of the best we have seen so far. Because it came with a number of amazing features and options which have pleased almost all the PUBG players. As the 1.8 update was great, fans are also expecting that PUBG Mobile 1.9 update should be at the same level or even more exciting.

The PUBG Mobile 1.9 update release date is expected between March 15th – 20th, 2022. Finally, people have to wait a couple of weeks further before the 1.9 version is released. You can directly download the update from the download link of the official website after the launch.

We can only see what new features we will get in the new upcoming PUBG update. But the Beta Version is the best source to get to know about the things which are coming. We have got the information about some PUBG Mobile 1.9 update leaks which are mentioned below:

A new bigger and better cheer park will be introduced in the next update. As you can see in the image, it’s looking more appealing and have amazing surrounding. So, just wait a bit until the update comes.

A new sniper rifle is added in the new 1.9 update of PUBG named “AMR” as you can in the above image. From this pic, you can also analyze that this will only be available in the airdrops. So, you need to loot the drops to get this new Sniper Rifle. Like AWM, it will also use its separate ammo. From rumors, it will be a strong and powerful weapon. You can take the enemy down with a single bullet and 2-3 bullets will be enough even to destroy the vehicle if hit properly. 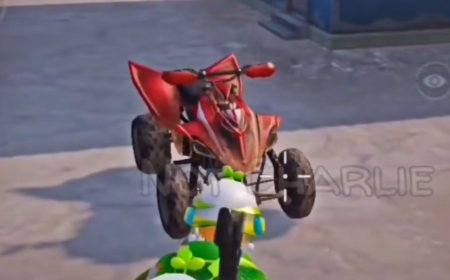 In the PUBG Mobile vehicles collection, a brand new item has been added. A new ATV bike will be available in the next season. It consists of four wheels and 2 players can sit on it. We don’t know so far whether the player sitting on the back can shoot or not as in the bike case. A new exciting “Emergency Pickup” may also come in the new PUBG Mobile update 1.9. Still, it’s not 100% confirm but the chances are high. By using this, you can go anywhere on the map very fastly especially when you are far away from the zone. After opening the ballon, an airplane will come and drop a rope containing a hook at your position. You will need to hook by pressing the button and then the airplane will carry you to your desired location. It will have the capacity to carry all 4 members of the team. As the name suggests, this exciting feature will let you self revive yourself if you are playing Solo matches or maybe playing 1v4 classics. You will get a new self to revive kit at the loot places but very rarely. If you have this kit in your backpack then you will get knocked instead of directly killed. After that, you will see the option to revive yourself by using this kit. Hopefully, we will also see this wonderful addition on this PUBG 1.9 update release. Now, the devs have decided to make the addition of the bicycle in the game as well. By thinking about that, it will be an amazing experience to operate the cycle. The benefit of bicycle is that it will not generate any voice or any marks on the map. So, your enemies can’t analyze that you have reached near them. But remember, the same situation will be for you if your enemy is travelling on the cycle. So, be aware!

PUBG Crossplay: How To Play With Friends On PS4 And Xbox

The process is very straightforward to download the new update. After the release, head over to the official website of PUBG Mobile from here.

On successfully reaching the page, you will find two options of download (small/compact & regular size). It’s up to you which APK file you want to download. Once the downloading process completes, go to location where the setup is saved and click on it to complete the installation.

When the game will install sucessfully, simply run the game and download the necessary resources before you start playing.