A question that many MHW fans usually ask “Is Monster Hunter World cross-platform? Is there any MHW crossplay support? Can you play MHW with your friends on different platforms?” So today, we are going to answer these questions and try to clear your confusion.

Monster Hunter World is a famous and fantastic hunting game for PS4 and Xbox One on January 26, 2018. However, for windows, it was launched a bit late on August 9, 2018. The game allows you to play with up to three of your friends and hunt down the monsters. The game made its name and has got a lot of success due to its thrilling gameplay, innovative weapons, and stunning graphics.

Cross-platform is a feature that allows the games to be playable on more than one platform. It means if a game has crossplay support, you can play this game on different devices by using your same account (such as PS4, PC, and Xbox One). If you are playing on PC, with the help of cross-platform, you can play with your friends whether they are on other platforms rather than just limited to only one platform. That’s the significant benefit of cross-platform functionality.

Monster Hunter World was released globally in January 2018 by the Capcom company and is a part of the Monster Hunter series titles. The Monster Hunter World is full of action and adventure with a role-playing style of game. The gameplay is in the fictional land in which players join as a hunter. As you play the role of a hunter, it means you will have to deal with a monster’s invasion while also stealing resources from them. The game features a very wide map for the players to explore, containing wild and town areas where players can hunt monsters. The Monster Hunter World also has several side tasks to complete. The opportunity to attack monsters with up to three other teammates is the best thing you can experience in this game.

When you first start the game, it begins with a brief animation intro of the player to its characters. As the name of the game, Monster Hunter World is suggesting the style of gameplay. The players need to hunt the monsters while improving their items and finishing the quests.

Unfortunately, there is no Monster Hunter World crossplay support available for now. Monster Hunter World doesn’t contain a cross-platform feature, so you cannot play with friends who are on different platforms. To play with your friends, all of you must have the same systems or game consoles to play together. 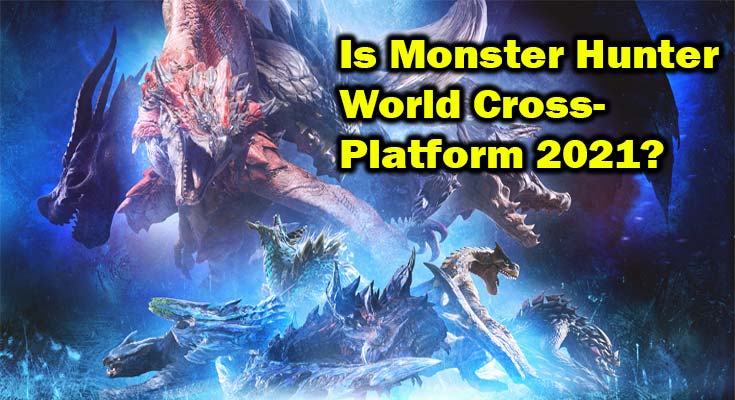 You can only play single-player campaigns, and there is no method for you to play with other players or with your friends to hunt down the giant monsters. However, we will discuss more related to the Monster Hunter World cross-platform support in the coming section.

The lack of cross-platform features in Monster Hunter World has disappointed many fans. They want to play with their friends even if they are on different platforms or consoles to kill the beasts and complete all the MHW missions.

If players cannot play with each other on separate platforms, they also can’t transfer their character from one platform to another unless they possess multiple copies of the game. So it’s not a viable choice in any way.

Very sad to say, there is no MHW cross-platform option for the PC players to play with the friends who are on the PlayStation 4. However, the game is available for both platforms, which means the players can play with one another if they are on the same platform.

Monster Hunter World is not a cross-platform game, and PC players can’t play with the other players who are on Xbox. You can see this from the game instructions. There is no official declaration about the crossplay feature.

There is a lot of discussion between the fans about this on the game’s official forum. But, we can’t say that we should completely lose hope and accept that it will not come in the future. Maybe, the developers will hear the voice of Monster Hunter World’s fans and work on it in the upcoming time.

As stated earlier, Capcom does not allow Monster Hunter World crossplay support to make the game playable on multiple platforms. As a result, players on Xbox One and PlayStation 4 are unable to play this game together. Out of many reasons, one reason why there is no cross-platform is that both devices use different engines to run the games. So, it’s not an easy task to make MHW cross-platform for both platforms. Moreover, another thing due to which Capcom has decided not to make this game cross-platform is maybe because of cheating. Preventing the players from cheating when playing on separate platforms and systems is very hard.

I’m not kidding when I say that this is a huge letdown. In 2022, most of the popular video games provide crossplay support. Because many players want to play with their friends on various platforms and complete the most challenging missions together.

Several other games, such as Fortnite and Minecraft, can properly incorporate this ability. Although, this is the deal with Monster Hunter World. Even in 2022, there is no Monster Hunter World crossplay support available for several reasons and technical limitations.

Same as in the case of PC, PS4, and Xbox crossplay availability, which we have already discussed, there is no cross-platform support between the PS4 and PS5. So if you are playing on the PS4 and your friend have purchased a new PlayStation 5, then you can’t be able to play together to eliminate the giant monsters.

Yes, such a thing made many of us very sad. The reason is that we always desire to play with our friends no matter which game we are playing, but we can’t do much about that. That’s the absolute truth, and we have to make our way according to the situation.

Also Check:- How to Unlock Zandalari Trolls in WoW: Shadowlands?

Why is there no Monster Hunter World Crossplay?

In the modern world of 2021, why still is there no MHW cross-platform available? We can’t say too much about the reason because the Capcom devs haven’t given any official statement about that. However, we can talk about the various facts which come to our minds.

The first thing is that enabling a crossplay option in any game demands a significant investment of time and resources. We know that Monster Hunter World is playable on all massive platforms (PC, Xbox One, and PlayStations). However, all of these devices run the games using different engines and services. So, it’s not easy to make this game compatible among the platforms as it demands a lot of hard work and an enormous amount of budget.

Another fact is that the game was first launched only for Xbox One and PS4. Capcom had released the PC version later. The console version of the game uses PSN and the Xbox One console’s online service (PSN and Xbox Live). On the other hand, the PC version utilizes the Steam service. These services use different servers and hardware. So, that’s another main reason why the MHW cross-platform is not possible between these platforms.

Monster Hunter World: Is there any Crossplay Possible?

Well, when writing this article, there is no chance and possibility that we will hear the good news related to cross-platform for Monster Hunter World. Unfortunately, the game also does not provide any PSN and Xbox Live options, which allow the players to play the multiplayer campaigns to finish the tasks and take down the monsters.

The first downside of not having the MHW crossplay option is that the playing community is divided into different platforms. Therefore, if players want to play multiplayer mode with their fellows, they can only play with them if they are also on the same platform.

As the game doesn’t feature any multiplayer-specific tasks, you will face difficulty completing some games’ missions by yourself. The two partnership monsters, Behemoth and Ancient Leshen are the harder to take down. Both contain a large amount of health and also damage very heavily.

Later in the game, the Monster Hunter World: Iceborne monsters, particularly Fatalis, can be tough to fight due to their ferocity and short attack delay. Alatreon, on the other side, maybe easy to play solely according to some gamers.

Although MHW crossplay is disabled, players still have the option to use the SOS function. It allows them to broadcast their ongoing mission on the mission board for all to see. In this way, players can ask others to help if they face any trouble completing the tasks.

Another bad thing is that the players cannot exchange the items with their friends between the different platforms. This thing also disappoints a lot of MHW fans.

Also Read:- How to Unlock Nightborne in WoW Shadowlands?

So this is a detailed and comprehensive guide, and I hope this post has clearly given the answer to your  question “Is Monster Hunter World cross-platform?”